As an introduction, a summary of the history behind this blog post:

In this blog post I will outline that a correct interpretation of Simpson’s paradox results in insignificance of many p-values and not just the one I focussed on in my criticism. In their response to my letter, Van der Lee and Ellemers wrote:

“Further, Simpson’s paradox cannot explain that fewer women than men are selected for the next phase in each step of the review procedure”.

In their response to Volker and Steenbeek, they phrased this as:

“Simpson’s paradox also cannot account for the observation that in every step of the review procedure women are less likely than men to be prioritized.”

With this response, they refer to Figure 1:

It is clear from this figure that the gender bias seems to increase in each step of the process. It is true that I, in my letter, focussed on gender bias in the final step – the number of awarded grants. This, however, was due to the word count limit that PNAS imposes and not because the other steps cannot be explained by Simpson’s paradox as well: they can.

It is easier to show this through a constructed example, rather than the true NWO data. Suppose that the setting is as follows. The funding agency has two research disciplines, A and B. Both receive 100 applications and through three stages (pre-selection, interviews, awards) it is decided who gets funded. In neither field A nor field B gender bias is present: gender is no issue in this example. However, the percentage of applications by women differs per field, and so does the amount of applications that receives funding.

Field A receives 100 applications: 75 by men and 25 by women. Finally, 40 applications will be funded. So 60 applicants receive bad news, which is equally distributed over the three steps: in each step, 20 scientists will be disappointed. In the case of total absence of gender bias (and coincidence), this leads to the following table:

Field B also receives 100 applications: 50 by men and 50 by women. Out of these 100, only 10 will be funded: in each step 30 applications lose out. This leads to the following table:

Thus also no gender bias in Field B. If we combine the tables for fields A and B (by simply adding up the frequencies for each cell), we obtain:

Converting these percentages into a graph similar to Van der Lee and Ellemers’ Figure 1 provides: 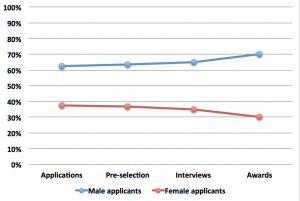 The pattern from the table and figure is very clear: in each step of the process men seem to be favoured at the cost of women. Although the percentages for this example are obvious different than those from the NWO-data, the type of pattern is the same. Since in my example there is no-gender bias whatsoever, Van der Lee and Ellemers’ claim that “Simpson’s paradox also cannot account for the observation that in every step of the review procedure women are less likely than men to be prioritized” evidently is false. The power of paradoxes should not be underestimated.

As a final note: as outlined above, the significant results claimed by Van der Lee and Ellemers is lost once correct statistical reasoning is applied. It is important though to realise that the absence of  significant gender bias does not imply that there is no gender bias. There could be and it is important to find out whether – and where! – this is the case or not. To conclude, I quote Volker and Steenbeek, who write:

More in-depth analyses with statistical techniques that overcome the above-mentioned issues are needed before jumping to conclusions about gender inequality in grant awards.

English summary: A Dutch Student Union did some research and complains about the stone coal english of university teachers. I complain about the quality of the research.